To share your memory on the wall of Robert Simons, sign in using one of the following options:

Print
The family of Robert C. Simons is saddened to announce his passing, at his home, in Clarkesville, Georgia.

Robert was originally from Granby, Massachusetts. He was a proud graduate of Springfield College, for both Undergraduate and Gr... Read More
The family of Robert C. Simons is saddened to announce his passing, at his home, in Clarkesville, Georgia.

Robert was originally from Granby, Massachusetts. He was a proud graduate of Springfield College, for both Undergraduate and Graduate degrees, where he was a top player on the Men’s Soccer Team. He served in the Peace Corps, in Costa Rica. He became a fluent Spanish speaker through that experience, and it had one of the largest impacts on his adult life. Robert was a bilingual guidance counselor at Cambridge Rindge and Latin School and Salem High School. He worked in Human Resources for several companies, in the Greater Boston Area. Up until his passing he was a passionate advocate for underserved youth. Robert was a life-long lover of soccer as a player, youth coach, and fan. He was an avid reader, foodie, loved to travel, enjoyed photography, and always stayed active. Some of Robert’s fondest memories were of summers in Kennebunkport, ME, as a young adult; family vacations in Wellfleet, MA; supporting his son in his youth soccer career; spending time with his grandchildren in Antigua.

He was predeceased by his parents and younger brother, Richard.

He is survived by his son Alex and his wife Leslie (San Diego), and his daughter Lily and her husband Clinton (Antigua), his 3 grandchildren: Tosh, Niyah, and Beka, and his former wife Cheryl (Medford).

In Lieu of flowers, donations can be made to the Joslin Diabetes Center at joslin.org

Receive notifications about information and event scheduling for Robert

We encourage you to share your most beloved memories of Robert here, so that the family and other loved ones can always see it. You can upload cherished photographs, or share your favorite stories, and can even comment on those shared by others. 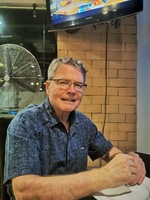