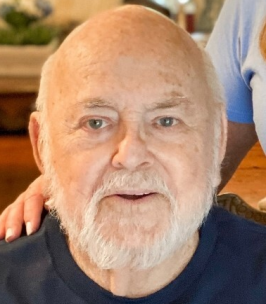 Born on December 26, 1932, in the Habersham Mills Community, he was the son of the late Floyd and Bertha Greemon Smith. Mr. Smith was a United States Army Veteran at which point he was stationed in Germany during the Korean War. He worked at Clarkesville Mill and Fieldale Farms Feed Mill where he retired. Mr. Smith loved old cars, hunting, fishing, and all things outdoors until his health failed him. He deeply cherished his grandchildren and great-grandchildren. Mr. Smith was a member of Habersham Baptist Church, but also made many new friends as he supported his son-in-law’s ministry at other local churches.

In addition to his parents, he was preceded in death by his beloved wife, Martha Mae Stewart Smith and sister, Evelyn Marie Moss.

Funeral services are scheduled for 11:00 am on Tuesday, July 26, 2022, in the Chapel of McGahee-Griffin & Stewart with Pastor Anthony Shore and Rev. Kenneth McEntire officiating. Interment will follow in Habersham Cemetery with full military honors provided by the Grant Reeves Veterans Honor Guard and the Georgia National Guard.

The family would like to express their appreciation to the host of wonderful caregivers at Aaron’s Home Care.

MCGAHEE-GRIFFIN & STEWART FUNERAL HOME OF CORNELIA, GEORGIA (706/778-8668) IS IN CHARGE OF ARRANGEMENTS.