To share your memory on the wall of Betty Joyce Cook Batson, sign in using one of the following options:

Born in Atlanta, Georgia on June 16, 1938, she was a daughter of the late Williams C. Cook and Clara Feltman Cook. Mrs. Batson was a foster parent f... Read More
Betty Joyce Cook Batson, age 82 of Mt. Airy, passed away on Thursday, December 17, 2020.

Born in Atlanta, Georgia on June 16, 1938, she was a daughter of the late Williams C. Cook and Clara Feltman Cook. Mrs. Batson was a foster parent for 25 years. She was a loving wife, mother and grandmother and enjoyed spending time with her family.

In addition to her parents, she was preceded in death by sons, Ronald Scott Batson and Scott Lee Batson; brother, William Howard Cook.

Memorial services will be held at a later date.

We encourage you to share your most beloved memories of Betty Joyce Cook here, so that the family and other loved ones can always see it. You can upload cherished photographs, or share your favorite stories, and can even comment on those shared by others.

Posted Dec 18, 2020 at 12:27pm
I am so sorry to hear of Mrs. Batson's passing. I seen her several months ago and we enjoyed a good conversation. Rick and family you will all be in our thoughts and prayers. 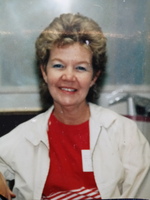